Cupcakes are a fan favourite in the world, but did you know that the history of cupcakes goes back to the early 1900’s? A cupcake is a small single size cake. About 1 or 2 bites, delicious with a coffee, and it can easily be baked in a small tin paper or an aluminium cup.

Who invented the cupcake?

The earliest extant description of what is now often called a cupcake was in 1796, when a recipe for “a light cake to bake in small cups” was written in American Cookery by Amelia Simmons.

In fact the first official use of the phrase “cupcake” was an 1828 reference made in Eliza Leslie’s cookbook. There is also a 1796 recipe reference of “A cake to be baked in small cups” made by Amelia Simmons in her book American Cookery.

What were cupcakes called in the past?

Back in the day cupcakes were  “Number Cakes” or “1234 Cakes”. This was because the recipes back then were simply  1 cup of butter, 2 cups of sugar, 3 cups of flour, 4 eggs, 1 cup of milk and 1 spoonful of baking soda. In simpler words, cupcakes started to become popular in 1919 when the company Hostess began mass producing them. Undoubtedly, they gained more popularity in the early 2000’s when NYC shops like Magnolia Bakery were featured on “Sex and the City”.
The first shop that was solely for just cupcakes was Sprinkles Cupcakes. Sprinkles cupcake has been open since 2005; and now stands at over 25,000 cupcakes per day, from 11 different locations!

What was the first cupcake flavour?

Aside from the history of cupcakes and all, the next question is what was actually the first cupcake flavour? Well lucky you, because I have the answer! The first cupcake flavour was a light cake that was baked in a small cup. In 1919, Hostess introduced it’s very first snack cake (AKA Hostess Cupcake). Cupcakes were finally decorated with frosting in the 1920’s. The most popular cupcake frostings at the time were either Chocolate or Vanilla Frosting.

How many cupcakes are eaten each year?

Now this question might be totally useless, but don’t lie, you’ve thought about things like this before! Buckle up because this number is going to blow your mind!

National cupcake consumption increased 52% between 2010 and 2011, and U.S. consumers ate over 770 million cupcakes last year! What a number!

Each year, December 15th is known as National Cupcake Day. 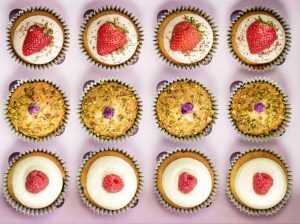 The history of Persian cupcakes goes back to an ancient city called “Yazd” in central Iran. Yazdi cakes were originally in flower shape aluminium cups. The main flavour of a Yazdi cake is Cardamom; however some recipes have rose water, which is totally optional. Unlike the other new types of cupcakes, “Yazdi cakes” are quite low in sugar, healthier, and have an amazing flavour as well as the authentic aroma.

Today vanilla is one of the most common cupcake flavors all around the world. In the past, cupcakes without frosting were more common. Before frostings entered the game, fruits, nuts and spices were common on cupcakes. Chocolate is another world class flavour, especially for a child’s favourite.

Cupcakes are quite a fan favourite in Adelaide. There are well over 10 different cupcake shops around the city of Adelaide; however sadly only a few of them offer cupcake delivery. With just a quick google search of “cupcakes near me” or “cupcake delivery Adelaide“, you will have all of the options around the city and their locations and most importantly their ratings. A shops rating is very important, as it shows you other peoples experience and helps you decide.

If you want to get a taste of natural authentic box of Persian cupcakes, be sure to check out my assorted cupcakes and grabbing yourself a delicious combination.

Hopefully this article has made you feel a little more confident about the history of cupcakes and how it all started! Don’t forget that if you do have anymore questions, that’s what the comment section below is for!

2 thoughts on “History of Cupcakes”

Shopping cart
close
Sidebar
Start typing to see products you are looking for.