Cakes. They are one of the most enjoyable deserts in the world! They come in different sizes, shapes, flavors and they can be found anywhere. Over history, more and more features have been added to cakes and more recipes have been developed.

But here is the big question…

What’s the most popular cake? The answer to this question isn’t as simple as you think. Each part of the world has a different cuisine and taste, which means each country has a different cake which is “most popular”. Although some of the cakes like chocolate and vanilla are most popular cakes in general all around the world. Here in Australia, we don’t really have a favorite cake, but we do have a few nationally loved desserts such as banana bread, pavlova and lamingtons. 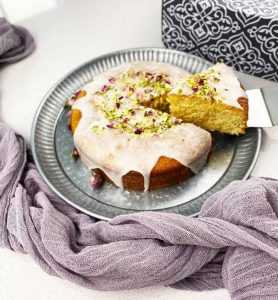 At Azidelicious, our cakes are based around the Middle Eastern flavors, which are quite different to the ones in the west. Let’s see why these flavours are different. The following are some of the most popular authentic Middle Eastern ingredients that make them unique and different:

Rosewater – originating in ancient Persia, rosewater is a flavored water which is from steeping rose petals in water. Rosewater has antiseptic and antibacterial properties which means it has medicinal benefits such as healing wounds, cuts, burns, and even scars faster! Almost sounds like magic! Also rosewater’s scent also makes it attractive in the perfume industry..

Cardamom – native to South India, cardamom, cardamon or cardamum is made from the seed pods of the cardamom plant. Cardamom is a close relative to ginger and turmeric and has been around for around a thousand years! As old as Vikings! Cardamom adds amazing flavor to food and is also a great helper in the digestion system!

Cinnamon – Cinnamon is a spice derived from the inner bark of many Cinnamomum tree species. Cinnamon is mostly used as an aromatic condiment and flavouring ingredient in a broad range of cuisines, including sweet and savoury meals, cereals, snacks, tea, and traditional foods. This spice is native to Sri Lanka and has been around since 2800 B.C! 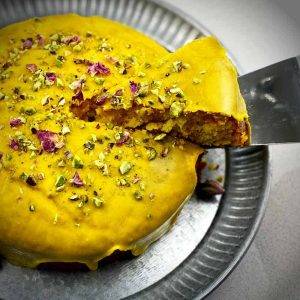 Rich in flavour and exotic in taste

Saffron – being another Persian icon, saffron is known for being the most expensive spice in the world. Saffron is used in a range of middle eastern food from savories to desserts. Also it is very easy to add to your diet, plus it has benefits such as improved mood, enhanced weight loss and cancer fighting properties. A must try!

Some of our most iconic cakes at Azidelicious such as the Persian love cake, saffron cake and apple crumble cake use these authentic spices.

We also include the above spices and many more in our other cakes and cupcakes!

It’s time for your taste buds to explore a world of new flavors!

Sidebar
Start typing to see products you are looking for.